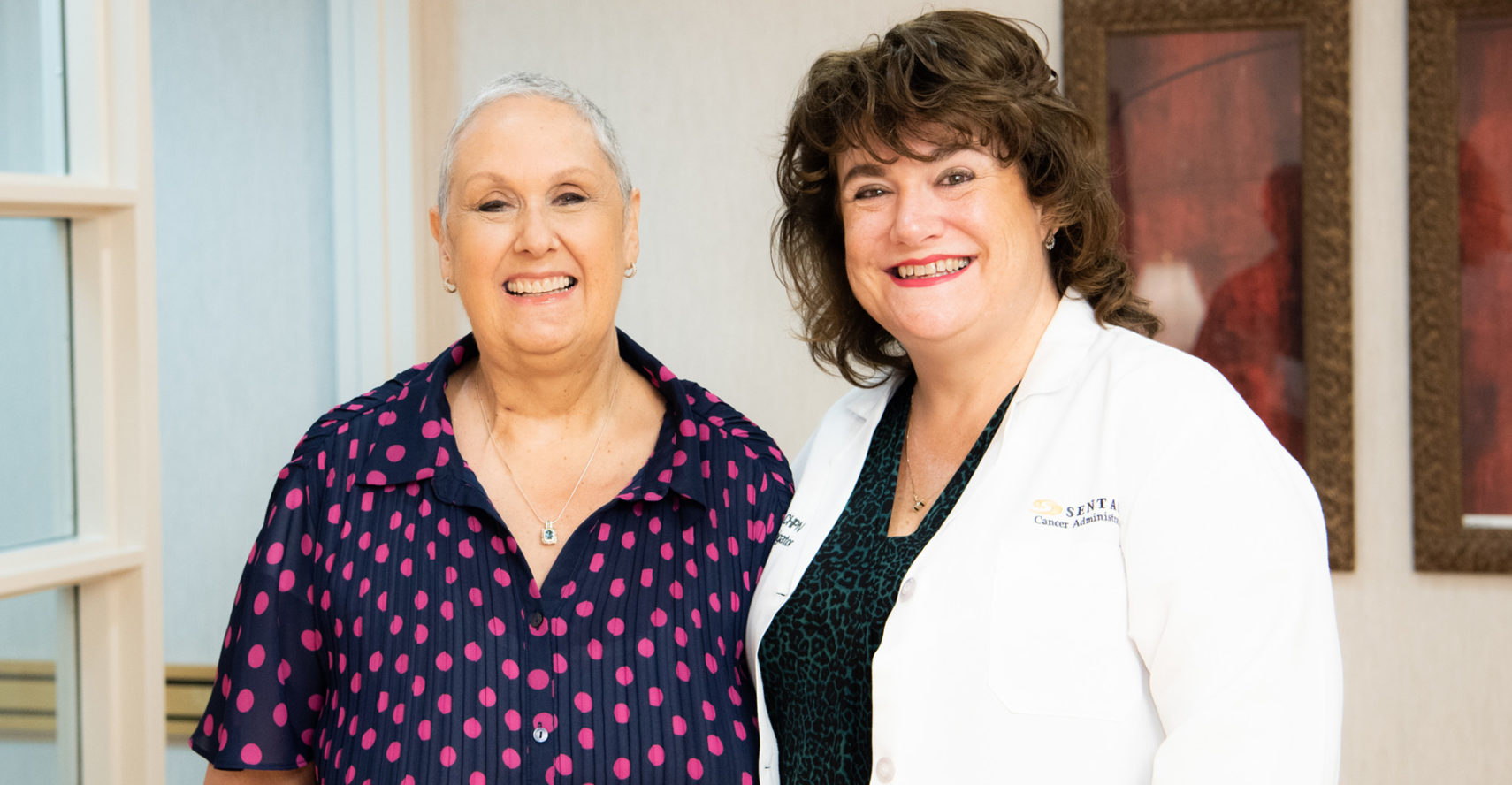 Kathy Baxter’s cancer diagnosis has been a journey.

Like many journeys, there have been twists, turns, peaks and valleys along the way.

Kathy and her husband of 43 years, Bruce, were longtime Northern Virginia residents who had moved to Puerto Rico.

It was there, she first detected the symptoms which lead to her breast cancer diagnosis.

“I noticed some retraction and I felt a lump right underneath my nipple” remembers Kathy, “I called my doctor and we scheduled an ultrasound. It came out fine. The doctor said it was because I have fibrocystic breasts.”

That was in December of 2016. The decision was made to follow up with another scan in six months. Kathy soon found things had drastically changed during that period. In July 2017, she received results from her Puerto Rican lab the test was “probably malignant” and she was referred to a surgeon.  Kathy says over the next few months a combination of events lead to obstacles in her care- everything from a language barrier in her doctor’s office to Hurricane Maria and then Hurricane Irma, which devastated the island causing major power outages and nearly brought air travel to a halt. The decision was made, Kathy would come to the states. After a turn of lucky events that Kathy credits as a “miracle,” she finally arrived in Northern Virginia in October 2017.

“When I got here in October- I was shell-shocked,” explains Kathy, “My sister lives in Stafford and she gave me the name of her oncologist.”

Kathy’s multi-disciplinary team of Sentara doctors helped her through the difficult transition. Dr. Hamed Khosravi, Medical Oncologist, Dr. Robert Cohen, Breast Surgical Oncologist and Dr. Susan Boylan, Radiation Oncologist worked together to develop a plan of attack after her diagnosis of Invasive Ductal Carcinoma which had gone to the lymph nodes. In addition to that diagnosis, her doctors discovered Kathy also had Triple Positive breast cancer.

Dr. Susan Boylan, a Radiation Oncologist for Sentara Northern Virginia Medical Center and Medical Director of Potomac Radiation, explains, “This type of breast cancer tends to grow and spread faster than others. It is particularly aggressive and requires additional treatment.”

With that knowledge in hand, the team created a treatment plan. It was decided Kathy would do 6 cycles of chemotherapy, take several weeks off, get a lumpectomy and then proceed to radiation.

“Each tumor is unique. Each woman’s tumor has its own biology,” explains Dr. Boylan, “We try to personalize an individual’s treatment based on the biology of their tumor. Everybody’s treatment is going to be unique to them. It’s very personalized medicine. It’s not cookie cutter.”

Baxter, a former nurse, admits it was a lot to take in, “I like to be able to process things. On top of that, I don’t like pain and I don’t like needles.”

While her family has been by her side through it all, Kathy credits Oncology Nurse Navigator Deana Henry with helping her work through the process, ”Deana is such a delightful person. She would make her rounds through the infusion center and really seemed to care about me and my health. She’s very friendly, she’s a very positive person and she was very sympathetic. She’s been a tremendous support.”

After chemotherapy, Kathy had her lumpectomy. She spent the summer recovering and is now working through radiation. As she nears the end of her treatment, she’s looking to the future and returning to Puerto Rico. She offers this advice:

“Take each moment as it comes. Live for the moment!” she says smiling. For any woman who finds a lump, her advice is more serious: “If anyone shared they had any sort of lump, I would insist on a biopsy, because I can’t help but think had they biopsied my lump in Puerto Rico in December, they would have found my cancer. That would have changed everything, that would have put me a year ahead of it. But I’ve just been so pleased with my care here at Sentara. They were responsive when I called and just so professional, it made a hard time a little easier.”

To learn more about the Sentara Cancer Network and find the care team for you or your loved one, call 1-800-SENTARA or visit Sentara.com.